Tax Deducted Source (TDS) is a concept of deducting tax at the very source of income with the intention of curbing tax evasion and maintaining a steady flow of income to the government.

The deductee can get the credit of the tax so deducted on the basis of form 26AS (annual consolidated credit statement) or TDS Certificate. 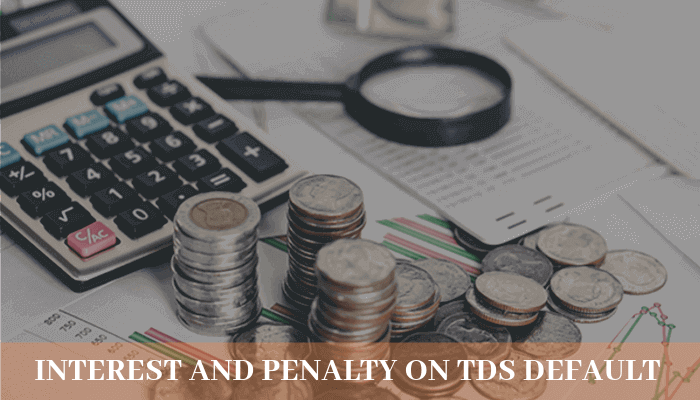 Default in respect to TDS

As per provisions of Income Tax Act,1961, Any person who made the default in Tds provisions shall be liable for the interest as defined under section 201. The type of defaults is as follows:

In the case of non-deduction of TDS

Where an assessee liable to deduct TDS, but not deducted tax on the whole or any part of the amount, such assessee in default is  liable to pay simple interest under section 201 at the rate of 1% for every month or part of the month on the amount of such tax from the date on which tax was deductible to the date on which such tax was actually deducted.

In the case of Tax deducted but not paid

The assessee who failed to deduct tax on the whole or any part of the amount credited or paid to the resident payee or recipient was not deemed to be an assessee in default under section-201 if the following conditions have been satisfied.

As we already know that the assessee shall be liable for the interest if he has not paid the TDS or does not file the TDS return within the due date. Now let’s discuss the due dates of TDS

The due date for Payment of TDS Return

As per provisions of Income Tax Act, 1961, The Assessee shall have to deposit the TDS within 7 days from the end of the month in which the TDS has been deducted except for the month of march where assessee would require to deposit TDS till 31st March.

The due date for filing of TDS Return

The penalty that can be levied with respect to TDS

Penalty for non-deduction or non-payment of Tds

As per the provision of section-271C of the Income Tax Act,1961 there shall be levied an penalty of an amount equal to the tax amount which is failed to deduct or pay.

The penalty under section 234E

As per the provision of section-234E, a penalty of Rs.200/- per day shall be levied till the date of filing Tds statements for default in furnishing the statements.

The penalty under section 271H

As per the provision of section-271H, a penalty shall be levied if the assessee fails to file the TDS Statement within the due date or incorrect filing of TDS return.

Note: No penalty shall be levied under section 271H, if the tax deducted or collected is paid to the credit of the government along with the fee and Interest (if any).and the Tds return should have been filed before the expiry of the period of one year from the respective due date.