Meaning of Show Cause Notice (SCN):-

It means order issued by a Court, Competent Authorities or an Organization by asking  Individuals or Organization to explain the reason what has been stated in the Show cause Notice that why the disciplinary action should not be taken against the individual or the group of people involved in certain incidents or in particular scenario at that time for the particular period. 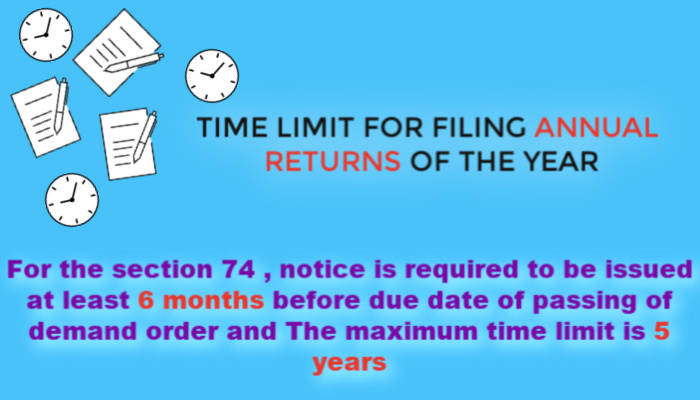 Reasons for SCN issuance under GST:-

SCN is issued for the cause of either for sections 73 or section 74  stated in it.

Section 73 of the CGST Act stating the reasons for which the SCN is issued for the assessment when the following incidents have occurred either for a single cause or combined cause as the case may be.

Accordingly, Taxpayer is required to pay the Amount Due along with the Interest and penalty under section 73 under the GST act.

Time Limit for issuance of notice under section 73:-

It is obliged to issue the show-cause notice at least 3 months before the due date of passing of demand order.

Demand order can be sent for the order of payment is 3 years from the due date for filing of annual return for the year to which the amount relates.

Under this section, SCN will be issued for the Tax Evasion cases where fraud or wilful misstatement or suppression of facts occurs. That will ultimately result in:-

For the section 74, notice is required to be issued at least 6 months before the due date of passing of demand order and The maximum time limit is 5 years from the due date for filing of annual return for the year to which the amount relates.

How GST Officer will proceed

Important Points to be considered while Issuing notice