Presently, a registered person under GST shall have to file the different returns at different times which make it more complicated. Also, different returns were specified for different category of customers. For Example, a person who has taken a normal registration shall have to file GSTR-1, GSTR-3B, GSTR-9 and the person who has registered under composition scheme shall have to file GSTR-5. Due to this complication, it has been recommended in the 32nd GST Council Meeting, that the filing of returns should be easy and new forms have It has been decided to be issued from October 2019. However, the applicability of these returns has been extended until April 2020. 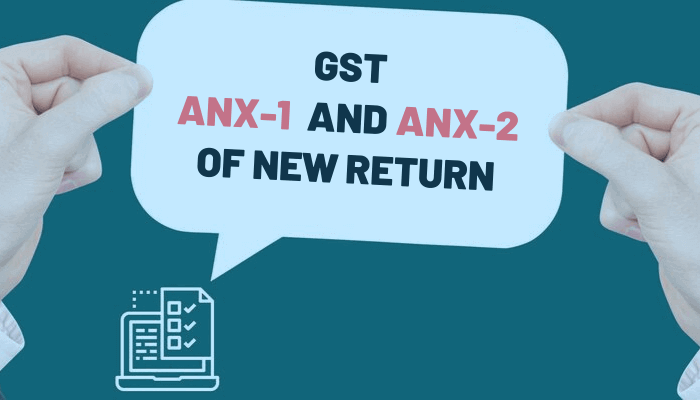 So, from April 2020, the main return would be required to be filed GST-RET-01. This forms shall contain the annexure ANX-01 and ANX-02. Although, there are other forms like Sahaj and sugar would also be applicable for the small taxpayer but the annexure shall be the same.

In this article, we will discuss the matters to be entered in these annexures.

In this annexure following details shall be entered:

In this annexure, the supplier shall enter the invoice details and the recipient would approve it on a real-time basis.

For those suppliers which attract the reverse charge mechanism, the details of such invoices shall be reported by the only recipient.

Now, there is an option also available for reporting of amendment transactions.

If the supplier has taken an advance for the purpose of supply then such advance shall not be included in annexure GST ANX-01, but this would directly require to be reported in table 3C of GST RET-1.

The reporting can be done throughout the month except on the following dates:

Those persons who will be required to file Monthly Return: 18th To 20th of the Month

Those persons who will be required to file Quarterly Return: 23rd To 25th of the Month.

If there is any transaction could not be reported by the registered person or there was any amendment would require to be made then he may report those transactions earlier of the following time limit:

Due date of furnishing of next year September month return

The actual date of filing of Annual Return

Such changes shall be reported by the supplier in form GST ANX-1A.

Those transactions which been rejected by the recipient shall be communicated to the supplier.

The time period for the supplier to enter the details of invoices is the 10th of Next month in which he has made the supply. However, If he has reported certain transactions after the end of such a period, then the recipient shall be able to look such invoices but he would not be able to take the credit for such month.