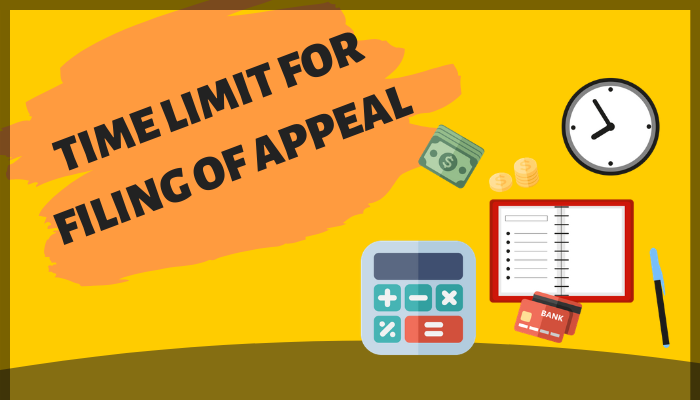 The time limit for filing the 1st Appeal

He can file the appeal within 3 months from the date of communication of the order of adjudicating authority which can be further extended by 1 month if there is a sufficient cause.

Note: Here time limit of 3 months has been defined because section 78 of the CGST Act, 2017 defines that where the order of demand has been passed under section 73 (under Bonafide cases) or section 74 (under Mala fide cases), the department gives 3 month time period to the assessee to deposit the demand amount or file an appeal otherwise recovery proceedings shall be initiated against such person.

The form used to file the appeal

A person may file an appeal in form GST APL-1, which he can file electronically or otherwise.

The assessee is able to file the appeal only when he has deposited the following amount:

Note: Here we have explained the amount of pre-deposit under CGST Act, 2017, if he also wants to file appeal relating to the demand of SGST then the limit shall get double.

Note: The taxable person is not the only party who has the right for filing the appeal, but the department can also file the appeal to the appellate authority.

The time limit for filing of the appeal

The appeal can be filed by the officer of a department within 6 months from the date of communication of order which can be further extended by 1 month if there is sufficient cause for delay.

The form used to file an appeal

Department officers can file an appeal in form GST APL-3, which he can file electronically or otherwise.

There is no pre-deposit amount has been specified in the law where the appellant is department itself.

The GST law has been drafted very cleverly. Here even if you have the knowledge about this law then you know about how deep, the lawmaker has thought, while making these provisions.

If the department officer fails to file an appeal within a period of 6 months (Extension of 1 month), then also they have the power to make changes in the order of adjudicating authority and this can be done by the revisionary authority.

Revisionary Authority, on its own motion or on the request of Commissioner of CGST or SGST examines the records of the order of adjudicating authority and found it be erroneous or illegal or improper or is of the opinion that all the material has not been taken into the account while giving the decision then such revisionary authority shall after giving an opportunity of being heard to the person and making further inquiry, pass such order as it deems fit including the order of increasing or decreasing penalty or interest or fees or annulling the order of adjudicating authority.

The time limit for making such revision

Similar to the appellate authority, where the stay has been made by the court or tribunal then such period shall be excluded while calculating the period of 6 months or 3 years.

If the person has been aggrieved with the order of appellate authority or revisionary authority then he may file a further appeal to the appellate tribunal and then high court and at last, at Supreme Court.

Let me summarise the whole article into the tabular form: