In this article, we will discuss all filing of an appeal to Income tax appellate authority (ITAT). This article will be divided into the following parts:

But first, let me explain to you about the hierarchy of officers under the income tax Act, 1961: 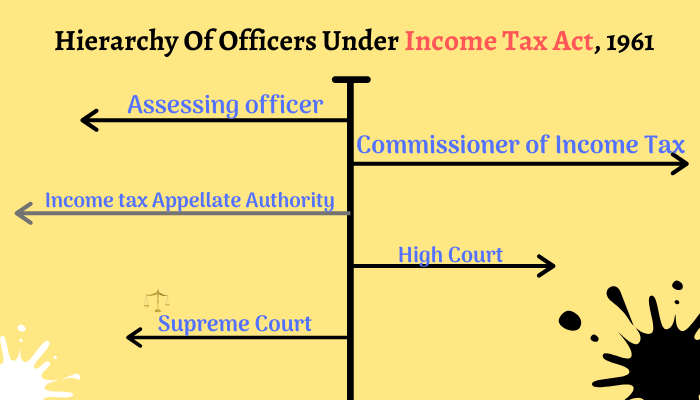 In simple words, an aggrieved party, on the order of its previous adjudicating authority, may file an appeal to its next superior authority. For Example: In case Commissioner of Income-tax (Appeals) passed the order against the assessee, then such person may file an appeal to income tax appellate authority (ITAT) subject to other provisions of the income tax act, 1961.  If the order again passed against him by ITAT then assessee may go to the high court and then-Supreme Court.

An assessee may file an appeal to the appellate authority against the following orders:

In simple words, an assessee can file the appeal to ITAT where the CIT(A) has made a rectification or refused to rectify the order under section 154, relating to the order of penalty under section 270A passed against such assessee.

Note: if the assessee has aggrieved with the order of his assessing officer, then such assessee shall have 2 option: whether to file an appeal to CIT (A) or making a request to CIT for revision under section 264.

Like this, the commissioner may itself or on the request of any person, may revise the order of assessing officer under section 263. In this case, the assessee can file an appeal to ITAT against the revision order of CIT under section 263.

Note: Where any person gives a donation to the trust registered under section 80G then such person shall be eligible for the deduction under this section.

In all the above cases I have discussed on the behalf of the assessee. However, the commissioner may also direct the assessing officer to file an appeal to ITAT against the order of CIT (A) of the order under section 250 or 154.

Note: Department cannot file the appeal to ITAT against the order of assessing officer passed as per the directions of DRP.

The time limit for filing of Appeal

The aggrieved party may file an appeal within 60 days from the date on which the order against which appeal is to be filed, has been communicated to CIT and assessee, as the case may be.

Where any party files an appeal to ITAT, then such an appellate tribunal shall send the notice to the other party and informed him that the appeal has been filed against him. In such a case, the other party may file a memorandum of cross objection to ITAT within 30 days in form 36A.

The ITAT shall treat such a memorandum of cross objection as if the fresh appeal has been filed. Also, the department can also accept such a memorandum even expiry of 30 days if it satisfied that there was a sufficient cause for not filing it within the prescribed time.

The income tax appellate tribunal may, after giving an opportunity of being of heard, pass such order as it may deem fit.

Where there is any mistake apparent from the record, then the ITAT may rectify such mistake under section 154 within 6 months from the end of the month in which the order has been passed by ITAT on the notice brought to by assessee or assessing officer.

Procedure to be followed by the tribunal for passing the order

The power and functions of ITAT are exercised and discharged by the benches constituted by the president of ITAT. The bench will be consist of at least 1 judicial member and 1 accountant member.

Order by Single member: In case, where the total income of the assessee, as computed by assessing officer does not exceed Rs.50 lakhs, then the president or the other member of the ITAT, on the authorization of the central government, my dispose the case by sitting singly.

On the question of law, the aggrieved party may file the appeal to the high court.

As we already discussed above, ITAT has the power to rectify its orders. However, ITAT cannot review its order passed under section 254(1).

1 thought on “Procedure For Filing of Appeal to ITAT”