NRI has to pay Income tax while filing of Income Tax Return Provided he must be Resident of India.

If his status is of NON RESIDENT,then-No income Tax will be payable, accordingly, No Return Filing is necessary to subject to the provisions of the income tax act,1961.

There have been introduced some changes in ITR Form for the purpose of NRI related Information. 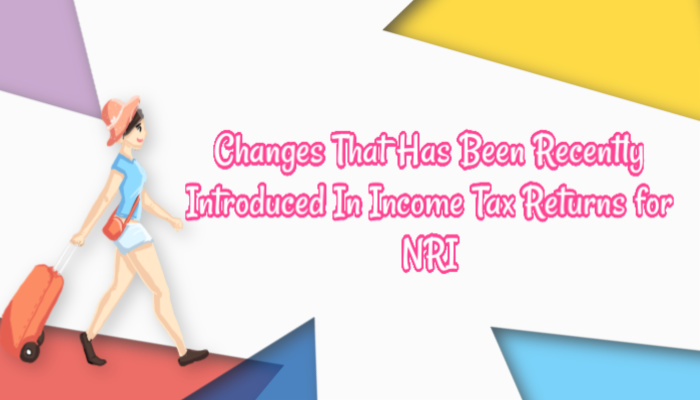 Let’s have a glimpse of these changes that have been recently introduced that are:-

With the intent to curb evasion and widening tax net, the government has taken numerous steps including the NRI’s Income disclosure thereof.,

The following are as follows:-

Residence country became a mandatory requirement now and is required to be disclosed by the NRIs while filing their Income Tax return. Detail of residency of another country needs to be filed in the prescribed form in ITR.

NRI must inform Taxpayer Identification Number that has been allotted to them in their residence country through this government can keep track of their reporting and their actual incomes by aligning with the other country departments.

However, In case Foreign jurisdiction of NRI does not issue any Taxpayer Identification Number, in that case, they need to mention their passport number in place of TIN and passport issuing country should be mentioned in the column meant for ‘’Jurisdiction of residence’’

One of the major and unwelcomed changes by the finance ministry is now Non Residents will have to disclose all their foreign assets. After a retrospective change in the definition of Resident but not Ordinarily resident by Finance Minister Nirmala Sitharaman in relation to the foreign asset, This move of government result in the reporting of undisclosed foreign Assets by the NRIs.

Along with proper residential status, govt is also expecting the basis from the assessee on which they had concluded their residential status. As there is a lot of difference in tax treatment and goodies available to ROR, RNOR & NR. So, proper calculation of residential must be there to receive all the benefits for which you are actually eligible and tax evasion could be avoided to a large extent.

Different countries have different rules to provide citizenship to their residents. So, it could be possible a person is a resident of one country but have citizenship of some other country also. So, It could be possible the person may declare his residence country in Income Tax of that country which will result in less tax burden due to DTAA signed by the government But in actual residence, the country should be some other.

So, the government has started demanding a tax residency certificate so that one could get the benefit from DTAA only if he is actually the resident of such a country. And Tax residency certificate shall be issued by any country only if such person is actually residing there and not only on the basis of citizenship. This is also a nice move taken by the government to pluck this loophole

NRI should be cautious while filing Income Tax Return covering above-discussed Changes recently introduced by the Government Of India.