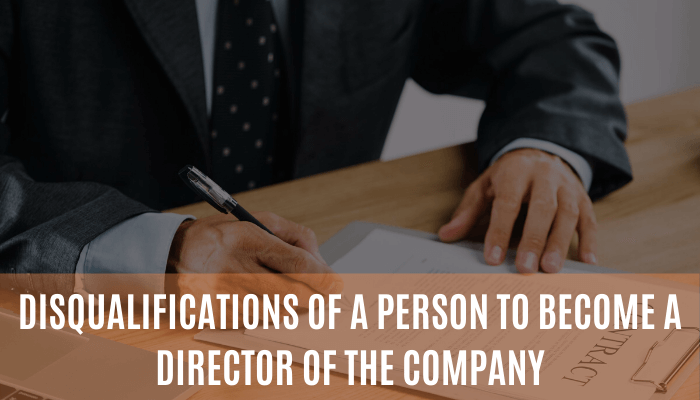 Disqualifications for appointment of a director (Section 164 of The Companies Act, 2013):

As per Section 164 of the companies act, 2013, A person shall not be eligible to become a director in the company in any of the following cases:

1. If a person is not of a sound mind and declared the same by a competent court.

2. He is undischarged insolvent.

3. He has applied to be declared judicially as an insolvent and the application is pending.

4. He has been convicted by a competent court of any offense, whether involving moral turpitude or otherwise and sentenced to imprisonment for not less than 6 months and five years has not been elapsed from the date of expiry of such sentence.

On the other hand, if a person is convicted and sentenced to imprisonment for seven years or more, then he shall be disqualified to become a director in any company for a lifetime.

6. He is holding any shares of the company whether solely or jointly with someone and any call has not been paid by him in respect of such shares and six months has been elapsed from the last date fixed for the payment of such call.

7. He has been convicted of an offense related to dealing with related party transactions under section 188 during any time in the preceding five years.

8. He is not holding Director Identification Number, as the holding of DIN is a mandatory requirement for a person to become a director in the company.

9. No person who is a director of the company which

Shall be eligible to be reappointed as a director in that company or appointed in any other company for a period of five years from the date the company has incurred the above defaults. [Section 164(2)]

It may be noted that the disqualification mentioned in point (d), (e) and (g) above shall not take effect: