An NRI can make an investment in India in many forms like the purchase of shares of an Indian company or open a company or any other form entity. The choice in respect of the legal form of an entity is one of the important considerations for NRI being foreign investors and entrepreneurs who are planning to do business in India. As I said before, there are various options like company, branch office, project office, liaison office, firms, etc. It all depends upon the business requirements. 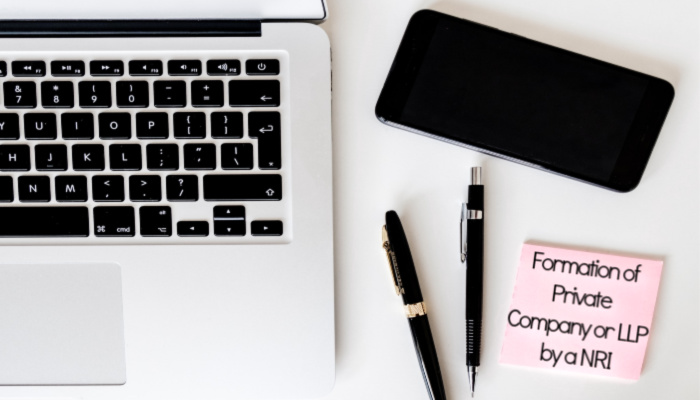 In this article, I have focused on 2 important options which are generally considered by the non-residents when they are willing to do business in India. They can operate in India by incorporating private limited company (private company) and limited liability partnership (LLP), due to the following reasons:

Private companies and LLPs are being governed by different statutes in India. A private company under India is required to be incorporated and governed by the Companies Act 2013 (the Companies Act) read with rules and regulations prescribed thereunder. Likewise, an LLP, in India, must be incorporated and governed by the Limited Liability Partnership Act, 2008 (LLP Act). While the wide judicial concept is provided by these statutes, the foreign investors need to also comply with various other regulations and requirements like Foreign Exchange Regulations, Income-tax laws, etc.

Formation of Private Company by a non-resident shareholder

The process for the formation of the company in India is online and it almost takes a few weeks to complete the whole process in case of foreign investors. The introductory activities including drafting the charter documents and authentication of the set of documents generally take some time.

The certification papers or documentation requirements include a copy of passport along with utility bill or driving license of the subscriber to charter documents, i.e. proposed shareholders.

In the case of a body corporate subscriber, a resolution is required to be passed by the body corporate along with the trademark of the proposed name, if any, The Companies Act has detailed specifications with respect to the verification of prescribed documents where the proposed shareholders are non-residents. For example, where the subscriber is from one of the Commonwealth countries (e.g. Singapore, Malaysia, the UK, Canada, etc.), and the documents or other certification papers are required to be validated by the Notary in the particular authority. In the case of non-resident shareholders from countries who have the signing authority to The Hague agreement and other authorities, the documents are required to be used, in addition to notarization.

The projected business activity, which the entity is planning to carry out in India is another key consideration.

The foreign direct investment (FDI) policy under the direction of the department of industrial policy and promotion, Government of India, delivers the direction vis-à-vis sectors and areas which are open for foreign investment into India. Although, most of the sectors are open to foreign investment without any condition of the previous regulatory approval (which is popularly known as automatic route sectors), foreign investment in definite sectors is subject to a previous government approval – like as multi-brand retail trade, and FDI exceeding prescribed limits in sectors such as telecom, defense, broadcasting, and aviation. So, a person resident outside India would need to ensure that the situations specified under the FDI guidelines are obeyed.

Additional significant attention at the planning stage is defining the fund requirements of the legal entity and the about the mode of funding. An Indian company that includes the major foreign shareholders can be funded through equity investment or debt funding or a mix of both. Although, Debt funding from non-residents is subject to certain limitations like the maturity period, all-in-cost ceiling, etc. The end-use of funds’ in overall debt from overseas lenders are not allowed for acquiring real estate, purchase of shares and for working capital purposes (in the final case, certain exclusions are carved out where the loan is raised from a foreign equity holder). Moreover, for certain businesses, mostly in the service sector, a previous approval from the Reserve Bank of India is mandatory to obtain foreign debt funds, as mentioned. Other primary compliance conditions for companies include the appointment of a resident director, the appointment of auditors, the issue of share certificates and obtaining tax registrations.

Formation of LLP with a non-resident partner

Likewise, to a private company, the creation of an LLP is an online process. An LLP with foreign partners can be set up in hardly a few weeks, with a better part of the time involved in the preparation and verification of requisite documents. The government has recently introduced ‘Form FiLLiP’, with a goal to significantly ease the incorporation timelines. Form FiLLiP is a formation form, which can also be used for the application of DPIN but maximum for two individuals. Newly incorporated LLPs are obligatory to submit their partnership agreement with the Registrar within the specified time frame to thorough the setup process. The verification process is applicable for the relevant documents for the creation of an LLP that is very similar to that of a company as mentioned above.

Foreign investment is allowed under the automatic route in LLPs operating in sectors where 100% FDI is permitted under the automatic route and where there are no FDI-linked performance conditions. With regard to funding of an LLP, it should be noted that presently LLPs are not allowed to raise debt funds from overseas. They are also not permitted to raise funds through external commercial borrowings (ECB).

Other primary requirements related to LLP include the appointment of one resident designated partner, obtaining other applicable regulatory registrations and obtaining tax registrations.

Hence, depending upon the business necessities, non-resident investors (NRI) have the option in which he can opt for a specific legal entity, incorporate or register the same and contribute to the huge business opportunity in one of the firmest growing economies in the world.

Now, Let’s discuss some of the most common queries in the form of FAQ which I have received from my clients and NRI friends.

At least 2 members should be there, in case of a private limited company. Like-wise, at least 2 partners are required to form an LLP.

In the case of a private company, the directors shall have to conduct at least 4 times in a calendar year and the time gap between 2 meetings should not be more than 120 days, subject to few exceptions. Moreover, companies are required to hold an annual meeting of members every year which is required to take place in India. Although, there is no statutory requirement is being specified for holding meetings by LLPs.

As per section 149 of the Companies act, 2013, At least 2 individual directors are required in a private company, and at least 1 of whom should be a resident in India.

As per the Companies Act, 2013, every company shall have at least one director who stays more than 182 days in India in the financial year. As per the LLP Act, a resident means a person who has stayed in India for more than 182 days in immediately preceding financial year. A person who is a foreign national and who satisfies these residency conditions can also be a director or designated partner.