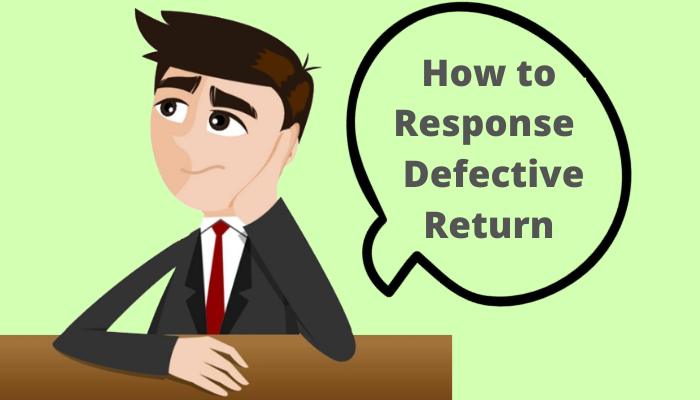 Sometimes we make some errors or omissions in return of income and we realize those mistakes after filing of such returns. To correct those mistakes, we file a revised income tax return. After the filing of the revised return, our original return shall not be treated in the department and it is considered as the original return has never been filed.

However, there are times, when we made some mistakes which didn’t come to our notice at the time of filing of return or later and we received the notice from the income tax department which that the return filed by you is a Defective Return Notice Under Section 139 (9) of the Income-tax Act, 1961. It asks you to rectify the error in the return within a prescribed period as mentioned in the notice otherwise the return filed by you shall be treated as an invalid return.

Hence, just filing of return is not sufficient. After filing of the return, you should, from time to time, check on the Income-tax website, that whether your return has been processed or not.

I have seen that many times a person has mentioned the details of his advisor or relative or friend in the profile of income tax and when the notice of income tax received on email or message then such other person may ignore such mail or message and if the defective return is not being answered within the time, then it becomes an invalid return.

Similarly, If a person is paying tax on the basis of MAT and has not filed the form 29B, then also department shall send the notice and declare the return as defective return.

When the Income-tax department detects the error in your return then the assessing officer may intimate you of defective return. It is necessary for you to rectify the defect within 15 days or the time period as mentioned in the intimation, from the date of intimation. If it has not been rectified within the said 15 days, then the return shall be deemed as an invalid return. This time period of 15 days may be extended by the AO on an application made by the assessee.

Once the 15 days time period and such other extended time to rectify the defects has been elapsed but the assessee has rectified his mistake after that period but before the assessment has been completed, then it’s upon the discretion of Assessing officer to condone such delay and whether to treat such return as valid return or not.