On 1st July 2017 GST (Goods and Services Tax) was introduced which replaced 17 different kinds of indirect tax including Sales Tax, Central Excise duty, Service Tax. Before the implication of GST, under each indirect tax law, there was different limit specified under which the person would have to take the registration and has to comply with each law. However, after the introduction of GST, the registration becomes compulsory for all the persons who fall under the provisions of section 22 or 24 of CGST Act, 2017. In simple words, GST has made a drastic change in the taxation system. However, if there is a positive effect then there would also be its negative impact. Same applies to GST. since some of the sectors have received a positive impact from GST along with that few of them have received a negative impact. In this article, we will discuss the impact of GST on MSME (Micro, Small and Medium Enterprises). 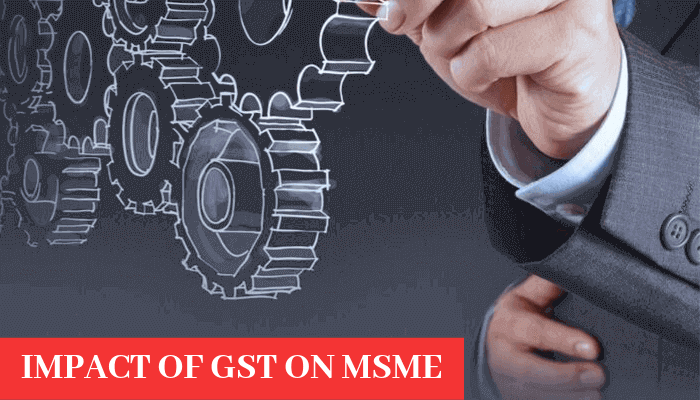 Before understanding the impact of GST on MSME, we will first have to understand the concept of MSME. MSME is the major source for the growth of our nation. Just because of MSME, more than 110 million people are employed and most of them are self-employed. Due to which, the Government of India has provided many schemes and benefits for such entities. As the name suggests, it defines 3 kinds of entities which are Micro Enterprise, Small Enterprise, and Medium Enterprise. The status of the MSME is being decided as per the investment made by such entity and the schemes and other benefits can be claimed as per the status of the entity.

So, when you will be called an entity an MSME, the criteria is as follows:

Likewise, we will look after the Impact of GST on MSME in the article below.

Positive Impact of GST on MSME

(Note: if he is taking the depreciation on GST amount, then he shall not be able to claim ITC on such assets. In simple words, the taxable person can claim either depreciation or Input Tax Credit on capital goods.)

Negative Impact of GST on MSME

Currently, GST is working as a helping hand in the MSME sector and it will surely transform the way enterprises operate and do business. We hope that in the future, there would be it will make a positive impact on the economic growth of our country.