Every year, in the first week of February, the Finance minister of the ruling government presents the budget for the upcoming financial year. However, If there is an election year like this year 2019, an interim budget would be presented because it is not possible for the winning government to make a new budget after the election and pass the bill before the new financial year begins. 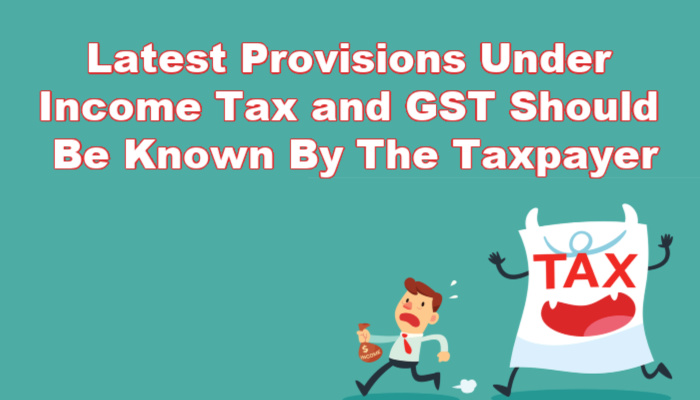 So in the election year, the ruling government presents the interim budget in parliament and the full budget is presented only after the new government comes to the power.

In February 2019, Mr. Piyush Goyal, who is also a Chartered Accountant, on the behalf of Our late finance minister Mr. Arun Jaitely Ji, has presented the interim budget in parliament and on 5th July 2019, the finance minister of BJP government i.e. Mrs. Nirmala Sitharaman presented the final budget. Generally, the Interim Budget and Full budget are almost the same.

In this article, we will discuss the latest provisions that should be known to the taxpayer under Income tax.

First, lets me tell give you the highlights of the tax deductions applicable from 01.04.2019:

Note: the Rebate Under section 87A shall be available only when the income of the assessee is up to Rs. 5,00,000. If the income exceeds even by 1 rupee then he has to calculate the tax without the benefit of this rebate. Let’s understand it with an example:

Up to the employee get the deductions of a number of allowances like medical allowance or transport allowance but the from FY 18-19 Government has introduced a new standard deduction in lieu of the allowances in which assessed shall get deduction under section 24 of Rs. 50,000 which has been increasing in this financial year from Rs. 40,000.

Till now, we have discussed the provisions in respect of Income-tax and now we will understand the latest provision applicable in GST which should be known by the taxpayer in the financial year 2020-21

Presently, a registered person under GST shall have to file the different returns at different times which makes it more complicated. Also, different returns are specified for different types of customers. For Example, a person who has taken a normal registration shall have to file GSTR-1, GSTR-3B, GSTR-9 and the person who has registered under composition scheme shall have to file GSTR-5. Due to this complication, it has been recommended in the 32nd GST Council Meeting, that the filing of returns should be easy and new forms have It has been decided to be issued from October 2019. However, the applicability of these returns has been extended until April 2020.

So, from April 2020, the main return would be required to be filed GST-RET-01. This form shall contain the annexure ANX-01 and ANX-02. Although, there are other forms like Sahaj and sugam would also be applicable for the small taxpayer but the annexure shall be the same.

In this article, we will discuss the matters to be entered in these annexures.

In annexure of ANX-1, following details would be entered:

In this annexure, the supplier shall enter the invoice details and the recipient would approve it on a real-time basis.

Those supplies which attract the reverse charge mechanism, then the details of such invoices shall be reported by the only recipient.

Now, there is an option also available for reporting amendment transactions.

If the seller has taken an advance from the customer for the purpose of supply then this would directly require to be reported in table 3C of GST RET-1 instead of including it in annexure GST ANX-01.

This annexure is somehow different from GSTR-1. Let’s take an example, in case of RCM, Mr. A is providing the arbitral services to Mr. B. Currently, Mr. A (Advocate) would be required to report the amount of those services in form GSTR-1. However, from April 2020, these services would be required to be reported only by the recipient i.e. Mr. B in our example.

This reporting can be done for the whole month except on the following dates:

Those persons who will be required to file Monthly Return: 18th To 20th of the Month

Those persons who will be required to file Quarterly Return: 23rd To 25th of the Month.

If there is any transaction could not be reported by the registered person or there was any amendment would require to be made then he may report those transactions earlier of the following time limit:

The actual date of filing of Annual Return

These changes shall be reported by the supplier in form GST ANX-1A.

Those transactions which have been rejected by the recipient shall be communicated to the supplier.

The time period for the supplier to enter the details of invoices is the 10th of Next month in which he has made the supply. However, If he has reported certain transactions after the end of such a period, then the recipient shall be able to look such invoices but he would not be able to take the credit for such month.

2. Restriction on the claim of ITC:

With effect from 01/01/2020, those invoices or debit notes which are not reflected in taxpayer’s FORM GSTR-2A then the ITC on such invoices shall be restricted to 10 percent of the eligible ITC reflected in his Form GSTR-2A. This rate is being recently changed from 20% to 10%

3. Non Availability for E way Bill: As per the latest provision in GST law, now if a person fails to file his return in GST for two consecutive periods then he shall not be able to generate E way, Bill. Hence, to generate E waybill, you should regularly file GSTR-1 and GSTR-3B on time.

4. Waiver of late fees for Non-filing of GSTR-1: Recently the government has introduced a very good scheme which is very much beneficial for the taxpayer under which it states that if a person has not fie dots GSTR-1, then he has the option to file it till 10th Jan 2020 without paying a single rupee of late fees. In simple words, by filing the return till 10th Jan, the late fees amount shall be waived off.

6. Extension for linking for PAN number with Aadhar: Again, the deadline for linking PAN Card with the Aadhar Card is further extended till 31st March 2020.

In this article, we have discussed all the latest provisions under the income tax act and GST law which should be relevant for the financial year 2020-21 and it should be known by every taxpayer. If you have any doubts in this regard then you can contact us through what’s app or phone call or by Email.