In this article, we will discuss the recent income tax changes proposed in the union budget 2019 which will be made applicable with effect from 1st September 2019. 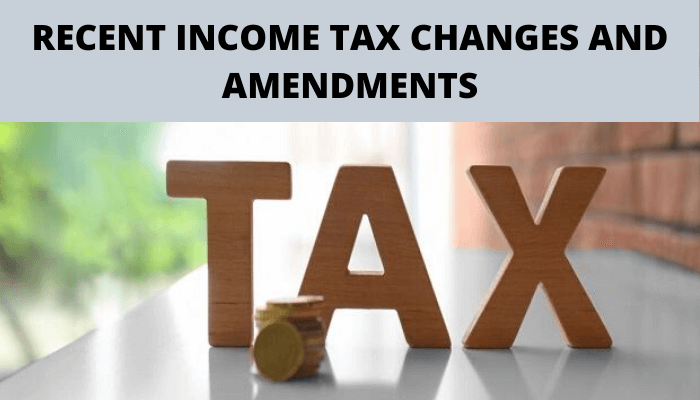 Below are the 5 recent income tax changes which will be made applicable from 1st September 2019.

There has been an amendment under section 194IA extending the scope of deducting TDS. With effective from 1st September 2019, TDS under section 194-IA shall be deducted at the rate of 1% on the consideration received for transfer of immovable property, and such consideration shall have to include all charges in the nature of car parking fee, electricity, club membership fee, and water facility fees, advance fee, maintenance fee, or any other charges which are in  similar nature and which are in incidental to the transfer of immovable property.

A new section 194N has been introduced in to the income tax act, with effect from 1st September 2019 to deduct any income tax at the rate of 2 percent on such sum exceeding Rs.1 crore at the time of payment of such amount by the person who is engaged in carrying on the business of banking or a post office such as  banking company or a co-operative society, which is responsible for paying any sum or aggregate of sums, in excess of one crore rupees in cash during the previous year to any person (referred to as the recipient in the section) from an account maintained by the recipient with such banking company or co-operative society or post office.

A new section 194M has been introduced in to the income tax act, with effect from 1st September 2019, to deduct any income tax at the rate of five percent on such sum, or aggregate of sums, paid by an individual or a Hindu undivided family (other than those who are required to deduct income-tax as per the provisions of section 194C or section 194J) on such sum paid as fees for professional services to a resident for carrying out any work (including supply of labour for carrying out any work) at the time of credit to the account of the payee or at the time of payment thereof whether in cash or by issue of a cheque or draft or by any other mode, whichever is earlier.

There has been made an amendment in section 194DA to increase the rate of tax deduction from 1 percent to 5 percent with effect from 1st September 2019.

With effect from 1st September 2019, there shall be deducted a tax at the rate of 5% on the sum paid to a resident under the life insurance policy and such sum shall include an amount paid by way of bonus on such policy, and such sum should exceed Rs.1 lakh.

Interchangeability of PAN and Aadhaar

In Union Budget 2019, Finance Minister Nirmala Sitharaman in her budget speech had proposed to allow interchangeability between Permanent Account Number (PAN) and Aadhaar with effect from 1st September 2019, i.e., the taxpayers can now file income tax returns by using their Aadhaar card in place of PAN card.