Where the NRI has transferred the shares which are listed in India to another NRI, then they have to comply with the certain provisions of the Act. In this article, we will discuss and understand the provisions of sections of those acts, which states about the transfer of shares: 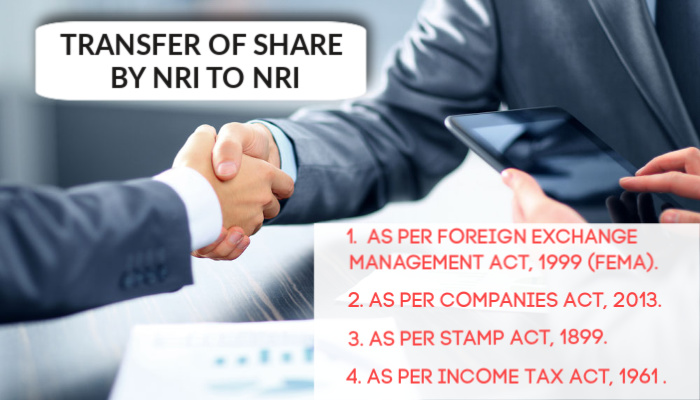 As per the Foreign Exchange Management Act, 1999 (FEMA)

As per Regulation 9(2)(ii) of FEMA (Transfer or Issue of security by a person resident outside India) Regulations, 2000 read along with Regulation 8(B)(I)(b) of the Master Circular on FDI in India (2015-2016), there is a general permission has been granted for the transfer of shares or bonds or debenture of an Indian company by one Non-Resident Individual to another Non Resident individual.

Although, if the shares are being transferred from NRI (Non-Resident Indian) to NR (Non-Resident), then it would be compulsory to take the approval of the Reserve Bank of India. However, there is no prescribed requirement has been made by the RBI for reporting in this regard under this act.

Although there is no reporting requirements have been specified by RBI, Section 56 of the companies Act, 2013, has to be complied with. Either the transferor of the Shares (Seller) or the transferee (Buyer of the Shares) must, in order to effectuate the share transfer, deliver the Share transfer form (SH-4) which should be duly stamped, dated and executed and it should be delivered within 60 days of the date of execution along with the share certificate to enable the Company whose shares are being transferred, to do the needful and update its Register of Members.

Section 21 of the Indian Stamp Act provides that for transfer of shares there is a requirement for the payment of duty which should be paid in accordance with Article 62 of Schedule 1, on the transfer of shares (with or without consideration) in an incorporated company or any other body corporate at such rate as may be prescribed for every Rs.100 or part thereof of the value of the share.

As per Sec. section 9(1)(i)(d) of the Income Tax Act, 1961, any income which has been accrued or arising, whether directly or indirectly, through the transfer of a capital asset situated in India shall be deemed to accrue or arise in India.

Also, TDS (tax deducted at source) requirement shall also apply to the NRI and such TDS shall be treated as Withholding tax. Also, the seller NRI shall have to obtain a certificate from the Assessing Officer.

As per the proviso to section 48, NRIs shall not be eligible for Indexation benefits and deductions, although, they can avail of the benefits from DTAA (Double Taxation Avoidance Agreement).

In the exemption method, NRIs shall be taxed in only one country and exempted in another country, whereas in the tax credit method, income shall be taxed in both countries, the NRI can claim the tax relief in the country of residence.

Till above, we have discussed the share transfer. Now let’s understand the tax effect when NRI transfer the securities other shares to another NRI

As per section 47 of Income-tax Act, 1961, following securities shall be exempt from Income tax when the same has been transferred by one NRI to another NRI