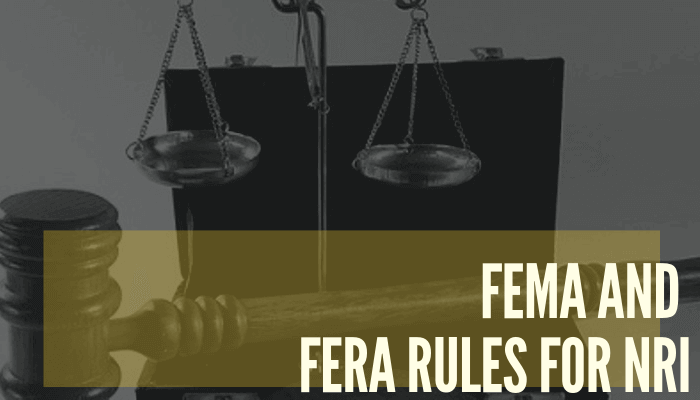 In this article, we will discuss the brief summarized description of FERA and FEMA Rules. Foreign Exchange Regulation Act (FERA) is the law that was passed in the year of 1973 by the Indian Parliament and came into effect as on January 1, 1974.  The purpose of this act is to impose strict regulations on transactions involving foreign exchange and to take control of the import and export of currency. However, due to such restriction, it results in a high level of dealing in foreign currency through black money. It might be possible that NRI may perhaps remember a period of several years back when there was a black market in India for buying and selling foreign currency.  Eventually, the government realized that FERA rules became a hurdle for economic growth and economic liberalization. At last, FERA was ended by the government in 1999 and the new act has taken place named “Foreign Exchange Management Act” (FEMA). This act focussed on the liberalization of foreign exchange controls and removed many restrictions on foreign investment. In simple words, FERA is nothing but a previous version of FEMA.

The objective of FEMA.

So, the FEMA came into effect as on the 1st of June, 2000, which replaced the Foreign Exchange Regulation Act (FERA). The objective of the Foreign Exchange Management Act is to perhaps, revise and unite laws that related to the foreign exchange transactions and to encourage orderly maintenance and development, of the foreign exchange markets in India. FEMA does not provide more restrictions as a comparison to FERA regulations, and this act is in line with economic liberalization policies of India.

FEMA aims to facilitate external trade and their payments in India, a systematic improvement and continuation of foreign exchange in the Indian market.

The definition of Non-Resident under FEMA is different as compared to the definition specified under the Income Tax Act.

As per the Income Tax Act, the residential status of a person is depending on the number of days he stays in India.

However, Under FEMA, it depends on the intention of a person, to be in India or outside India. As per the provisions of Income Tax, A person shall be called Resident outside India (NRI), if he resides in India for 182 days or less in the preceding financial year. Although there are some exceptions which are:

For example, a person resides in maybe India for only a short duration with the intention of employment.

Any international monetary transaction either to or from India is being governed by FEMA (Foreign Exchange Management Act) 1999. This Act came into effect after the FERA act was deleted and regulates all transactions that deal with foreign exchange. In the following, we shall discuss the five most important FEMA regulations that every NRI must know:

As and when the person fulfilled the requirement of NRI as per FEMA, he will become an NRI and then he need to open certain bank accounts as specified which would be designated for NRIs. These include:

As per the FEMA Guidelines, the NRIs can make an unlimited investment in repatriable or non-repatriable transactions. Although, there is an exception that the small savings schemes or Public Provident Fund (PPF) which aims to mobilize small savings by offering an investment within the reasonable returns combined with income tax benefits.

3. Acquisition and transfer of immovable properties

All NRIs and Persons of Indian Origin (PIO) (other than some specified countries) can purchase all types of residential and commercial real estate in India. Following are the exception of the above:

4. Repatriation of current and immovable assets

As explained above, the income earned outside India can be remitted by the NRI in Non-Resident External Account on foreign repatriable assets such as rent earned from an immovable property owned outside India. According to FEMA guidelines for NRIs, the sale amount of foreign assets are non-repatriable outside India without RBI approval. However, Repatriation of up to USD 1 million per financial year would be allowed only if you have inherited such property or retired from employment in India.

As per the Liberalized Remittance Scheme defined in FEMA, those Indian students who are NRIs, they can receive a maximum of US$ 10 lakhs per year from their NROs or NREs, or from any profit gained from properties or estates. The NRI students can also be eligible for receiving an amount equivalent to US$ 2.5 lakh per year for caring for their close relations.

2 thoughts on “FEMA and FERA Rules for NRI”