As per Income tax act, 1961 there are 5 heads of income under which an assessee may have to pay the taxes and this assessee includes the residents and Non-residents. Although, It is normally noticed that a non-resident does not possess such knowledge of the Act by which he, unintentionally, did not the taxes and then have to suffer interest and penalty. Well if you are a Non-resident then this article will help you to identify whether you will be liable to pay the taxes in India as per your income or not. 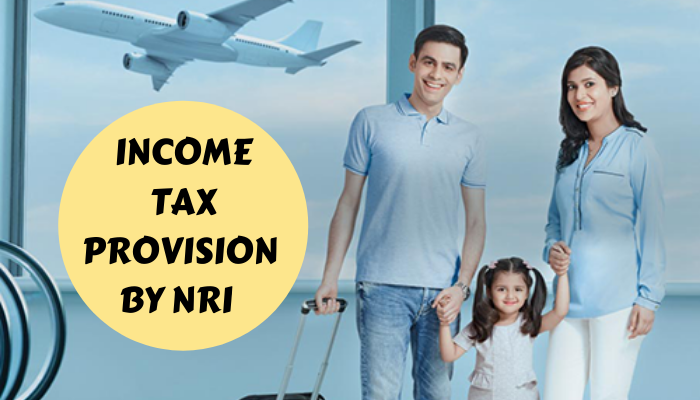 If you are a resident and went abroad for some time then this article is relevant for you also, because in this article there are some provision has been explained for such persons.

Before understanding the taxation, first, it is necessary whether you are covered under the Non-resident definition under the Income-tax act or not.

Hence, if as per the above definition if you are an NRI then you should know the income tax provision as defined below which treat NRIs differently from resident Indians. By this article, I have tried to explain it in a very simple manner about the tax implications under Income tax act for NRI:

1. For Non-Residents, that income which has been received in India or earned or accrued in India shall be taxable in India.

As per the Income-tax provisions, if you are an NRI as per the above definition, then you shall be liable for the payment of tax in India in respect of that income which has been received in India or earned or accrued in India.

Now let me give you some examples for more clarification:

A foreigner shall be liable for the payment of taxes in India if he received:

The above was mentioned about the Non-resident. However, if a person is a resident earning the income in India as well as out of India, he shall be required to pay the taxes on both kinds of income i.e on Indian income and foreign income both.

While a person is NRI earning the income from outside India and in India he shall be liable for the payment of taxes in India only in respect of income which has been earned in India.

It might be possible that for NRI, there would be some income which is taxable in India as well as his country of residence. In such a case, he can claim the credit of tax from his residence country by double taxation avoidance agreement. This may vary from case to case basis.

If you to know more about double taxation avoidance agreement then you can refer our previous article.

2. NRI cannot avail the benefit of basic exemption if he is having again from the term capital assets in India i.e. having a long term capital gain:

Tax slab rate for a person being an individual aged less than 60 years or a person being Non-resident shall not be required to pay the taxes on the total income up to Rs.2,50,000. It means if the Non-resident is having the total income up to Rs.2,50,000 than he would not be required to file the income tax return.

However, if he is having a long term capital gain only, then such a basic exemption limit shall not be available to him.

Note: In case, if his income is more than the basic exemption limit i.e. Rs.2.5 Lakh and the TDS has been deducted on the whole amount of tax amount if

If he is a resident, then he is not required to pay any tax because he can avail the benefit of sab rate since his income is below the exemption limit. However,

Note: Total Income means the income after allowing all the deductions after chapter VI-A

3. An NRI is not eligible to invest in PPF.

As we already know that if a person makes an Investment in any of the schemes as mentioned in section 80C under Chapter VI-A, he shall be eligible for the deduction of maximum up to Rs.1.5 lakhs per annum. Under section 80C, one of the investments is in PPF (Public Provident Fund). Also, if any interest being earned on PPF account and maturity proceeds, both shall be exempted from tax. This investment is one of the best investments for tax purposes. However, an NRI is not eligible for the investment in PPF anymore. Kindly note, if the residential status of a person being a resident is subsequently changed to NRI, the account was allowed to be run till maturity.

4. An NRI is not eligible for taking the deduction under section 80DD and 80DDB which relates to expenditure incurred in respect of the medical treatment of self or dependent (handicapped/person of disability/suffering from the specified disease).

It means if an NRI has incurred expenditure in respect of the medical treatment of self or dependent as mentioned in section 80DD and 80DDB, such NRI cannot claim any deduction. Although if the said expenditure is being incurred by a resident, he can claim the deduction.

Kindly note that the above disallowance for NRI is not made under section 80D i.e, deduction under section 80D, the amount paid for medical insurance or medical expenditure which has been incurred on the health of self or family shall be available for resident and non-resident both.

5. As per Finance Act, 2019, the benefit of Nil tax on the total income up to Rs.5 lakhs, is not available to Non-resident Individual under section 87A.

As many of us know that in the finance budget 2019, the government has given very beautiful benefits to all the individual resident person under which it states that if the total income of a person being a resident Indian is up to Rs.5 Lakhs then he is not required to pay the taxes. Let me explain it with an example: if a person is having a total income of Rs.5 Lakhs then after giving the slab rate benefit his total tax liability would be Rs.12,500 and as per section 87A, the government has increased the limit for deduction under section 87A from Rs.2,500 to Rs.12,500. In simple words, a resident individual is not required to pay the tax if his income is up to Rs.5 Lakhs. However, his income is exceeded by even a single rupee then he shall not be eligible for taking such deduction and liable for the payment of taxes by applying the normal tax slab rates.

Unfortunately, the said benefit of deduction under section 87A is not applicable to a Non-resident person

6. NRI is having a different TDS rate as a comparison to resident Indians.

TDS means Tax Deducted at Source/Withholding tax. TDS rates are different where the deductee is non-resident and where a deductee is a resident person, Let me tell you with an example: A non-resident is selling its property in India to a resident person in such a case, the buyer shall be required to deduct the TDS under section 195 at the rate as prescribed under this section which may vary from long term or short term capital assets. However, if the seller is a resident person, then in such a case, the property buyer shall be liable to deduct the TDS under section 194IA at the rate 1% on the consideration value where the sale value has exceeded Rs.50 Lakhs.

7. Senior citizens being NRI is not eligible to take the benefit of slab rates which is available for senior citizen resident individuals.

As per Income tax act, different slab rates has been defined for the different age group. For A.Y 2020-21, where a person is individual resident is aged between 60 years to 80 years, he shall be considered as a senior citizen and his income up to INR 3 Lakh will be exempt from income tax. If a person having an age of more than 80 years, he shall be considered as a super senior citizen and his basic exemption limit is increased to Rs.5 lakh. However, this benefit is also not available to a person being Non-resident. In other words, an NRI, even he is a senior citizen or super senior citizen, his basic exemption limit shall be the same i.e. Rs.2.5 Lakhs and he shall be liable for the payment of income tax as per the normal slab rate.

8. Deduction of Rs.50,000 on interest on deposits under section 80TTB is not available.

As per section 80TTA, a person being a resident individual aged less than 60 years and a Non-resident, is having an income from interest on deposits from Banks or post office than they shall be legible for the deduction up to Rs.10,000 or the amount of income whichever is lower. However, if the said person has aged is 60 years or more is a resident individual, the deduction amount shall be increased to Rs.50,000 under section 80TTB. In simple words, the benefit of Section 80TTB is not available to Non-resident persons.

9. NRI person does not require to have an Aadhaar number

As per Section 139AA of the Income-tax Act, 1961, it is compulsory for the assessee to quote the aadhar number at the time of filing of his income tax return however there are some exceptions are also specified in this section which includes Non-citizen of India. Hence, a person being NRIs are not required to quote aadhaar number while filing an income tax return

2 thoughts on “Income Tax Provision an NRI should know”