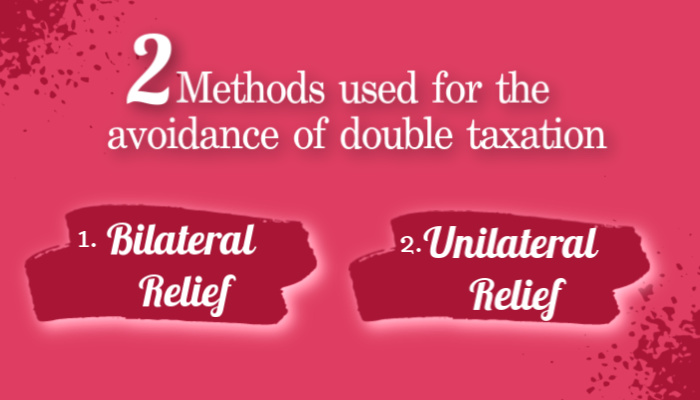 Following are the 2 methods used for the avoidance of double taxation:

1. Bilateral Relief: Countries are entering into Double taxation avoidance agreement (DTAA) with each other. (Section 90 and 90A)

Bilateral relief can be given by any of the 2 following methods:

2. Unilateral Relief: When there is no agreement between the countries, the country of the residence itself provides relief. (Section 91)

In simple words, the effect of double taxation avoidance agreement is that

Also, if the provisions of the Double taxation avoidance agreement are beneficial, then DTAA will apply. For example: if as per DTAA with a foreign country or specified territory, the royalty is taxed @10% then it will be more beneficial for the taxpayer to choose DTAA although under income tax act, the rate shall remain same i.e. 10% but here the assessee shall get the benefit of the surcharge and education cess. In other words, if the taxpayer has chosen Double taxation avoidance agreement over the income tax act, 1961, then there will be no education charge and surcharge.

What are the benefits to have DTAA in our country:

It is seen in some cases that the few terms in the agreement are not defined properly hence for this, income tax act has made the following provisions:

If the assessee, other than a resident, to whom Double taxation avoidance agreement applies, he shall not be entitled to any claims under tax residency.

The charge of tax in respect of foreign company which is at the higher than the rate which is applicable for the domestic company is chargeable and shall not be less favorable charge or levy of tax. Let me explain this paragraph with the help of an example

Cosmos Limited, a company incorporated in Mauritius has a branch office in Hyderabad opened in the assessment year 2019-20 disclosing the income of Rs.50 Lakhs. He has paid the applicable double taxation agreement. i.e. 30% plus education cess of the basis of paragraph 2 of article 24 of Double taxation avoidance agreement between India and Mauritius.

Under section 90(2), where the central government has entered into an agreement for the avoidance of double taxation with the government of any country outside India, as per case may be, then in relation to the assessee to whom such agreement applies, the provisions of income tax act, 1961 shall apply to the extent they are more beneficial to the assessee. Thus in view of paragraph 2 of article 24. It appears that the Indian branch of cosmos limited, incorporated in Mauritius, is liable to tax in India at the rate applicable to the domestic company (30%) or the rate which is applicable to the firing country (40%), whichever is lower.

Under the Income-tax act, there are 5 heads of income have been defined and different sources of income are taxed in these heads and under the DTAA respectively. Here we look at some of them.

Documents to be Submitted to Benefit from the DTAA

For claiming the if the person stays in India for less than 183 days, NRIs may have to first apply for the benefits under the DTAA by timely submission of the following documents to the concerned deducting intermediary (to the bank whose services you are availing):

Following are some of the things which should be included in the TRC :

Tax Identification Number Of The Person In That Country,

The Period For Which The Tax Certificate Is Issued.

An NRI may have to get TRC for two consecutive years since in India, the calendar year and the financial year differ.

Taxation for an NRI residing in any of the 84 nations with whom India has signed a DTAA – Double Tax Avoidance Agreement is subject to the clauses in that particular treaty.

Hence by reading this article, we have come to know about the double taxation avoidance agreement. DTAA is something that helps the assessee to reduce your tax burden and not tax evasion. So by Use the DTAA judiciously, one can plan to save the income tax in India and country of residence – be it UK, UAE, US. Let us know if this article was useful or if you want something to be elaborated on.