What are the Capital Assets?

A Capital asset either movable or immovable nature is defined to be assessed under the Income Tax Act,1961. Capital Asset is intended to be held for Earning Future Economic Benefits either in Monetary Or Non-Monetary Terms. Capital gains are applicable to capital assets such as stocks, bonds, jewelry, and real estate property 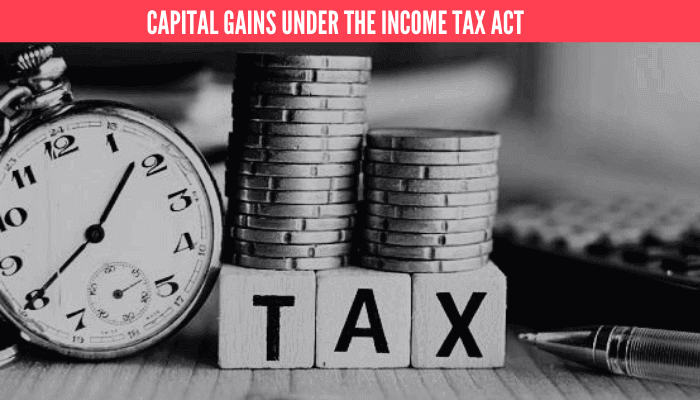 The capital assets must be transferred in the relevant financial year in order to be eligible for taxation during the current year so that Appropriate Capital Gain Rates can be properly applied and calculated.

What is the Capital Gain Tax Under the Income Tax Act?

When the Capital Asset is sold then the difference between the Sale Value and Cost of its Acquisition is taken for the Calculation of  Capital Gain Tax under the Income Tax Act,1961.

Capital Gain Tax may be of Two Types:-

Short-term gains on investments that are held as an investment for a period of fewer than 12 months period…  Short-term capital gains tax applies to assets held for a year or less and is taxed as ordinary income.

The profit on an asset sold after less than a year of ownership is generally treated for tax purposes as if it were wages or salary. Such gains are added to your earned income or ordinary income. You’re taxed on the short-term capital gain at the same rate as for your regular earnings. An exception is when the amount of the gain happens to push you into a higher marginal tax bracket.

LTCG covers the majority category of Assets that meet the definition of Long Term Nature. LTCG rates are determined under section 112A. Example for LTCG,

For the stocks/equity mutual funds for the holding period should be of more than 1 year.

When the Capital Gains is calculated and when the sale receipts from a Capital Asset is less than the cost of acquisition either indexed or not including all expenses on transfer on Capital Asset – instead of a Capital Gain you incur a Capital Loss. Type of asset is seen While Capital Gains are taxed according to the tax rate for the purpose of Taxability either they are long term or short term Assets.

It is meant by Losses can be carried forward if in the particular year Losses could not be set off due to certain reason namely, No head of capital gain income left or The income eligible to be set off is insufficient to be set off for the fixed losses.

Accordingly, if Losses couldn’t be set off of an entire capital loss in the same year, either Short Term Or/and Long Term loss then it can be carried forward for 8 Assessment Years immediately following the Assessment Year in which the loss was first computed.

Mandatory Filing of a Return:

5 thoughts on “Income tax: What is the  Capital Gains under the Income Tax act”