As we know that Budget 2020 was presented on 01st Feb 2020 by our Hon’ble Finance Minister. In every budget, the government has several objectives like the generation of more employment, simplification of tax, reduction in the fiscal deficit, etc. With all these objectives, sometimes the budget becomes harsh for the taxpayers. Well in this budget you may feel that the same has happened with taxpayers.  On the budget day, the market fell down very badly. In this article, I will tell you, what changes made in this budget for Non-residents. 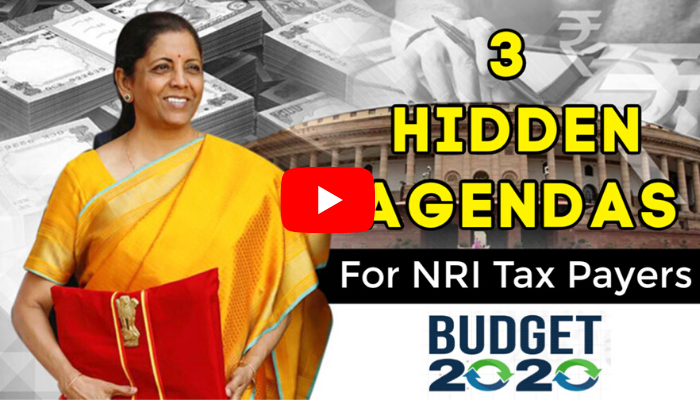 Well, let’s start with benefits for Non-residents. In areas of ease of obedience, one change that has been proposed by the Finance Minister to extend the exemption to non-residents from filing annual income-tax return in India in additional cases.

Before understanding the amendment, we will have to first understand the current provision in respect of which changes have been made.

Section 115A of the Act provides special rates of taxation for income in the nature of dividend, interest, royalty, and FTS earned by an NR (including foreign companies). Under sub-section (5), such an NR is exempted from the requirement to file a return of income in India if its total income consists only of specified interest or dividend income and appropriate taxes have been withheld at source on such income.

In other words, in respect of Non-resident, if his total income consists only of dividend or interest income and TDS has been deducted according to on such income as per the provisions of the Act, then such Non-resident is not required to file the return of Income.

Although, those Non-residents who are earning royalty or fees for technical services (FTS) from India were, however, still required to file their return of income in India.

It is now intended that a non-resident would not be required to file his return of income in India if:

It is important here to note that as per the proposed changes, the said benefit is available only if the tax is deducted at the rates as mentioned under section 115A of the Act [i.e. ten percent plus surcharge and an education cess in case of royalty or FTS].

However, as per Section 90 of the Income-tax Act, a taxpayer has an option to be complied by the provisions of the Act or the applicable tax treaty, whichever is beneficial to him. Many of the tax treaties, with which India has entered into, offer for the withholding tax rate in respect of income earned by way of royalty or FTS (i.e. not effectively connected to the permanent establishment) at 10% or less.

After analyzing of Based on the above, we can say that the tax rate mentioned under the tax treaty could be lower if we compared it with the tax rate as provided in section 115A of the Act. In the said situation, as the tax deducted at source (TDS) could be at the rate which is less than as provided under section 115A of the Act, an opinion which arises is that the exemption of not filing the return of income in India may not be available in that case. Consequently, the non-resident would be now required to file his return of income in India.

Analyzing the above, in case a non-resident who is availing the benefit under the tax treaty, a possible view may appear that the non-resident may be mandatory to file a tax return in India.

It may further notice that there has been no related change suggested in the transfer pricing provisions and hence if a non-resident who is receiving such income from an associated enterprise, may still be compulsory to undertake transfer pricing requirements in India.

Non-residents will, therefore, have to be mindful of the extra condition and their accurate position prior to making any conclusion in a manner of their India tax return.

As I said earlier, in every budget, government tries to more simplify the taxation for taxpayers and in this budget, they have also attempted for the same by introducing the prominent change for individual taxpayers that is the new optional tax rule wherein the tax slabs have been extended with six gradual tax rates relevant at various income thresholds. The new tax rates are subject to certain conditions including the relinquishment of specified deductions and exemptions such as the popular deduction for investments under Section 80C, LTA, donations, HRA, interest on housing loan for a self-occupied property, etc.

Now that tax slab rates for an Individual taxpayer shall be as follows:

Although, there are some other major changes that have also suggested by the Finance Bill 2020 which will influence the individual taxpayers in many other ways. One of the changes made in the budget is related to the ‘Residency’ provisions as per section 6 of the Income-tax Act, 1961 (Act).

Again, first, let me tell you that what was the provision before the amendment.

a person is called a resident who stays in India for

Since in the example we have mentioned that Mr. A went foreign for the ist time so, the 2nd condition won’t be satisfied.

Hence if an individual who could not satisfies both the above criteria qualifies as a ‘Non-Resident’. Although, our government consider that some individuals using the said provisions misappropriate to avoid qualifying as a ‘Resident’ in India, by achieving their stay period in India which would be less than the specified limit of 182 days and hence evading the tax on the payment earned in India, even though they might be carrying out a major economic undertakings are within India. Hence, in order to control the probable tax loss, the Finance Bill 2020 suggests cutting the threshold to 120 days in the tax year coupled with 365 days in the previous 4 financial tax years in order for an Indian citizen visiting India. This will definitely influence non-residents who have major business or family has a connection in India and who are naturally plan longer visits to India.

As per the existing tax laws, an individual shall be qualified as a ‘not-ordinarily resident’ if he has been a ‘Non-Resident’ in India for a person at least 9 out of the 10 previous tax years

Has been in India for an overall period of 729 days or less during the 7 previous tax years.

An individual whose period of stay exceeds these limits shall be qualified as an ‘ordinary resident’ and therefore would be required to pay taxes in India on his global income.

The Residential status-related provisions have not been touched for many years. Interestingly, the government had done in 2019 by introducing the detailed disclosure requirements in the tax return forms to assess the taxpayer’s residential status in India. Those Individuals who have qualified as ‘ordinary resident’ or as ‘not-ordinary resident’ were required to provide the information for their period of stay in India during the tax year and in preceding 10 years.

Similarly, those Non-resident individuals who are Indian Citizens were required to disclose their period of stay in India for the tax year and preceding four tax years. Non-resident individuals were also required to enter their country of residence, along with their taxpayer identification number in such jurisdiction. These changes were introduced in the residency provisions which clearly indicates that the government’s focus is on widening the tax base and growing tax revenues by working any avenues for tax planning. Therefore, It is important for Indian Citizens and also globally employees to carefully evaluate their residential status and assess their tax liability in India accordingly.