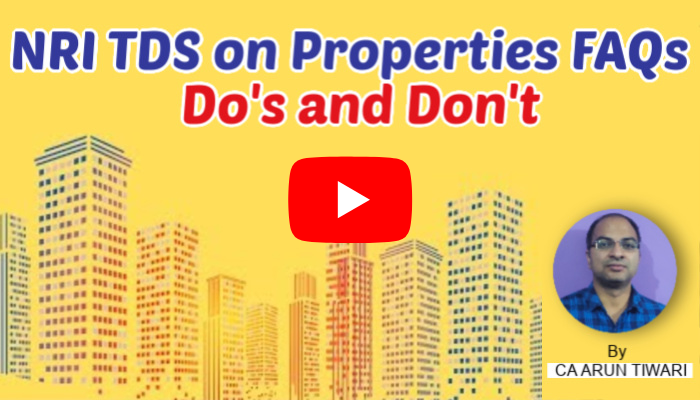 In this article, we will discuss all the major TDS deduction which is compulsory to be made on the payment to NRI. NR means Non-resident, it can be an individual or a company or any association. Mostly Non-resident came to India for making the investment. They can make the investment through the purchase of property or invest in shares or mutual funds or business trust or any other security. In each kind of security, different TDS rates have been prescribed. So, Let’s begin.

Q What is the TDS rate on the interest amount earned under the section to be paid to NR or foreign company?

An Interest can be given on many payments, here we will talk about the specific payments on which tax rate has been defined under the income tax act, 1961 and which is required to be deducted as tax under section 195

Section 115(A): This section covers 4 subsections in which different types of interest are covered. This section shall be applicable, whether the NR as having a PE in India or not.

Section 195: As per this section TDS is required to be deducted @ 20% when the interest income earned under section 115A(1)is being paid by the Indian concern or the government on the loan given by the NR in foreign currency, other than the interest referred to in 2,3 &4 below.

Section 194LB: Under this section, where the NR has invested in any infrastructure debt fund in foreign currency than such funds shall deduct the TDS @ 5% under section 194LB on the interest amount to be paid to such NR to a foreign company.

Section 194LC: If the interest is being due from any Indian company or the business trust to NR or foreign company on the loans or bonds or rupee-denominated bonds which has been subscribed by the NR in foreign exchange within 01.07.2012 to 30.06.2020 and which has been approved by the government of India, then on such interest, the Indian company or the business trust, as the case may be, shall deduct the TDS on the interest amount @5% under section 194LC.

Section 194LD: This section is applicable where the payee is FII. You may have noticed that in all the above subsection, to deduct TDS under these sections, it was compulsory that the payee should invest in India in foreign currency but the same not happen in this subsection. In other words, TDS shall be deducted on the interest payment @5% under section 194LD even if he has invested in any currency.

The period for income from an investment should be earned from 31.05.2013 to 30.06.2020 and the securities can be rupee-denominated bonds or any other government security.

Also, if they have sold the securities from which they have earned a long term or short term capital gain which is taxable under section 112A or 111A, then there is no requirement for the deduction of TDS.

You see, the government has given many benefits in respect of rupee-denominated bonds. If you want to know more about these bonds then you can refer our previous articles in which we have made a detailed discussion on these bonds.

Q When the TDS is deducted under section 195?

Section 195 is a general section of the income tax act, 1961 in which it defines different rates of TDS which is required to be deducted on the payment to NR. Like as I specified above section, another section is also mentioned in the income tax act which deals with different rates of TDS on the payment to NR. For example, TDS shall be deducted on the royalty fees or fees on technical services to NR under section 115A where such NR is not having the permanent establishment in India and under section 44DA where the NR is having the permanent establishment in India. These sections are very wide, although if you have any queries in respect of these sections, then you can inform us. We will make a specific article on these sections as per your request.

Q Whether TDS is required to be deducted on the online advertising payment made to NR whose PE is not in India?

So, if the NR is doing the transaction through the permanent establishment (PE), then on online advertisement services provided by such NR, TDS is required to be deducted under section 195 i.e. 30% in case of NRI and 40% in case of Foreign company.

But what if he does not have any PE in India and he is providing the services directly from abroad. In this case, there is no TDS mentioned in the act. Instead, the government has introduced other term i.e. equalization levy which needs to be deducted by the payer to the NR who does not have PE in India.

The due date for depositing of Equalisation levy is the same as TDS i.e. 7th of the next month in which it was deducted.

Normally it is seen that NR does not allow to deduct the TDS on his payment, in such case, the payer can deposit the TDS by grossing up the consideration amount.

Similar to section 40(a)(i), under section 40(a)(ib), if the payer does not deduct the TDS or deducted but fails to deposit the Equalisation levy within the due date of filing of the return, then the expenditure shall be disallowed in the hands of payer.

Likewise, such payment shall be allowed in the financial year in which the payer has deposited such Equalisation levy to the government account.

Q What are the consequences, if the payer did not deduct the TDS on the payments related to interest or royalty fees or fees for technical services?

Or deduct but fails to deposit it within the due date of filing of return under section 139(1) of Income Tax act, then the expanse on whose payment TDS was to be deducted shall be disallowed in the hands of the resident payer.

In such a case, the assessee shall be treated as assessee in default under section 201 (1)

Although, such a resident payer may claim the expenditure in the financial year in which he has deposited the number of TDS which is deducted on the payment of NR.

In simple words, As per section 40(a)(i) of Income-tax act, 1961, the expenditure in the hands of resident payer shall be disallowed if on the interest or royalty fees or fees for technical services or any other sum but other than salary (Because on salary, TDS is deducted under section 192)

Now, why I’m repeating this provision because, there is a major change has been introduced from finance Act, 2019 in which it states that expenditure shall be allowed to the resident payer in case 1 i.e. where the TDS was deductible by him but he fails to deduct the TDS and he is deemed as assessee in default under section 201.

As per section 201 of the IT Act, a person shall not be treated as assessee in default even if he has not deducted the TDS on the payment to be made to NR if:

Hence, the government has given a big relaxation to all the NR recipients because in some cases, they just have to file the return to claim the refund which has been deducted as TDS.

Note: Do not confuse 40(a)(i) with 40(a)(ia) because of the later section applicable where a recipient is also a resident person. If the payer fails to deduct the TDS or deducted but fails to deposit it within the due date of filing of return under section 139 then only 30% of the expenditure shall be disallowed to such resident payer.