In our previous articles, we have explained that the income of Non-resident which has been accruing or arise or deemed to accrue or arise in India, shall be taxable in India. NRI may have income from outside India from employment or business or in India from any other sources which he wants to be kept in India. 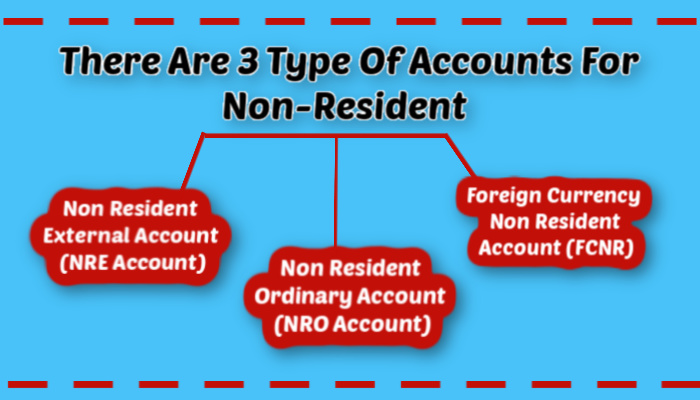 After analyzing above, A NRI have been given an option to open 3 types of accounts which are

All the above 3 Accounts can be opened as savings accounts or current Account or Recurring deposits or fixed deposits accounts.

But before that, it is necessary to understand when a person shall be called a Non-resident. Although, for this also, we have a separate article, so here let’s take a glimpse of the definition in a simple manner

Since in the example we have specified that Mr. A went foreign for the ist time hence, these conditions won’t be satisfied.

Now we will discuss each account one by one:

An NRI can also appoint a person by a power of attorney who can use the debit card and checkbook.

The amount deposited in the account and the interest earned on such deposits is totally tax-free.

NRO Account is the account opened by the NRI in which he can maintain and manage its income earned in India like any rental income or dividend income etc.

Whenever the residential status of any person is changed, the normal bank account can also be redesignated into NRO Account.

In NRO accounts, the tax deduction is not available to NRI as compare with NRE Account.

For Example, Mr. Nikhil went to the US for employment last year. Since, he resides there for more than 182 days, hence he becomes a Non-Resident. His family lives in New Delhi. Mr. Nikhil has also owned 10000 shares of Reliance Industries. In August month, RIL issued a dividend of Rs. 1,00,000/- to Mr. Nikhil.

He has also received a salary income of 10000$ in August month.

Now, Mr. Nikhil has 2 incomes. One is in the foreign currency as salary and second is in Indian currency as dividend income.

He shall deposit the salary in NRE Account which shall be converted in the Indian currency at the prevailing exchange rate on that day and Dividend income shall be deposited in the NRO Account.

In India, the savings Bank interest rates are much higher then as compared to other countries. This is one of the reasons that most of the NRIs want to invest in India. In this case, although they earn higher returns they always have a foreign exchange risk. Let me explain it with an example:

That means, although he has earned a better interest in India as compared to Australia due to a decrease in rupee rate during the year, he has to incur a net loss of $571.43

2 thoughts on “Types of Accounts for Non Residents”